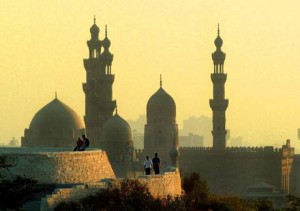 epa000284703 Late afternoon visitors to the North Lookout of the new Al Azhar Park are presented with a dramatic view of the Sultan Hassan Mosque in the old Islamic district of Cairo 27 September 2004. The Al Azhar Park, which was created from a garbage dump between the ancient Ayyubid Walls and the City of the Dead under the supervision of the Aga Khan Trust for Culture, will open to the public on 01 October 2004 and is the first park created in Cairo for many decades. EPA/MIKE NELSON